Jordan is  in the middle of several conflicts, this has made for many years, a country of refugees (Palestinians, Yemenis, Libyans, Kurds, Iraqis, Syrians).

Since 1948, Jordan has welcomed millions of refugees fleeing from Palestine (about 3 million to 6 million inhabitants). The war in Iraq against Saddam in 2003 caused another wave of immigration. In 10 years more than 500 thousand Iraqis have crossed the border with Jordan. To date the Syrians fleeing the conflict have already exceeded one million. The statistics reported 799 landmine victims per year. About 22% of the refugees are assisted in the refugee camps.

Having supported the orthopedic workshop of Terre Des Hommes Syria in 2013 thanks to Prosolidar Foundation, because of the difficulties in continuing activities, the Able You Onlus has sought other ways to help victims of the conflict, in Christmas 2013, the meeting with the Italian Campaign to  Ban Landmines led to  an alliance that will take a very long and good work. The Director of the Campaign against Mines in Rome, the doctor Giuseppe Schiavello, introduced  Kamel Saadi, President of LLCR, an association that supports victims of mines in Jordan. In April 2014 we  sent the first prosthetic kits to Syrian children in Amman. In June 2014, the first mission to visit orthopedic centers, community foundations operating on the ground, the Italian NGOs and their projects, and also to visit the beneficiaries of sent kits (we have a special thanks to our UTL in Amman). Just returned, was born the project to open the orthopedic workshop in Amman along with the Italian Campaign to Ban  Landmines, operated by the local partner LLCR.

The main objective of the project promoters is to help anyone in need, regardless of age and is of any nationality and religion is. The activities begin, purchases of machines, aids and raw materials.  At the end of 2015 the workshop opened and began working. 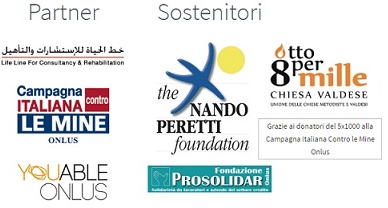 LLCR – Life Line Consultancy and Rehabilitation
At the age of 14, Kamel Saadi became a landmine survivor and amputee.

On 16 March 1979, Saadi was enjoying a picnic with family and friends near Umm Qais, an area along the Jordanian‐Israeli border contaminated with landmines from Jordan’s conflicts with Israel during the 1960s and 1970s. While walking along a hilly pathway, he stepped on a rock concealing a landmine that caused severe damage to his foot; eight hours later, doctors amputated his left foot.
In the coming years, Saadi underwent rehabilitation and networked with other amputees. In 1985, he had to
terminate his college studies at Glendale Community College in Los Angeles, California (U.S.), to return home for a third amputation to reach an eight‐inch below‐the‐knee stump (a so‐called perfect amputation).
Inspired by his and others’ experiences, he founded Life Line Consultancy and Rehabilitation in 2007 to provide assistance to other landmine survivors and persons with disabilities. LLCR is a Jordanian national nonprofit that assists survivors with their physical, emotional and financial needs, while also striving to educate the public about persons with disabilities (particularly amputees regardless of the cause) and landmine hazards through mine‐risk education. LLCR comprises a three‐person staff and contracts with others when needed depending on the projects.
According to Saadi, “Our style is based on simplicity, heart to heart, direct interaction, involving professional knowledge based on specific demands, and the provision of immediate needs; a hug or a handshake to your surprise may often be an immediate need.”

Mission
LLCR’s mission is to instill self‐confidence in survivors and help them reach their goals and objectives by utilizing their capabilities. LLCR aims to create an atmosphere that encourages landmine/explosive remnants of war survivors and other amputees to be independent, productive members of society. Its training, rehabilitation and confidence‐building courses, consultations and workshops seek to address survivors’ needs beyond physical rehabilitation. For successful reintegration into communities, LLCR helps create conditions within remote areas that allow survivors with limb loss and/or deformities to obtain their required care.
LLCR employs various creative outlets, such as painting, drawing, sculpture, mosaic and carving into rehabilitation. In addition, it uses theatrical production to teach schoolchildren in Jordan’s mine‐affected regions how to identify and avoid the threat of ERW. LLCR developed a play called “We Love Life” in 2008 in partnership with James Madison University’s Center for International Stabilization and Recovery in response to Jordan’s landmine‐stricken communities, their critical need for mine‐risk education and the hopes of preventing future landmine incidents. Jordanian survivors and amputees serve as actors in the play. In addition to creating opportunities for survivors to find themselves through the theater, this project helps create job opportunities for
them in the arts business. LLCR and CISR worked closely with Jordan’s National Committee for Demining and Rehabilitation which provided guidance regarding landmine incidents and assisted with selection of performance locations and implementation of the project.
The play’s success led to the incorporation of MRE into Jordan’s local schools’ art and theater programs in mineaffected areas. Evidence of “We Love Life’s” success could be observed in the children’s art projects, which demonstrated a heightened understanding of the play’s key messages. “We Love Life” was financially supported by a grant CISR secured from the Office of Weapons Removal and Abatement in the U.S. Department of State’s Bureau of Political‐Military Affairs (PM/WRA).